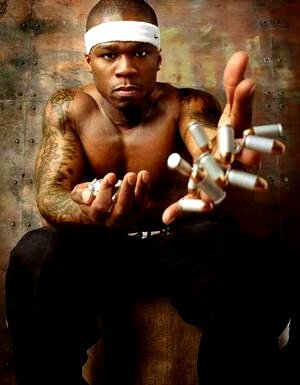 In May 24th 2000 50 Cent and his homeboy 22 year-old Alton Brown were sitting in his parked car in the Jamaica section of Queens outside 50’s grandparents’ residence on his way to the tattoo parlour and then to the studio at about 11:20am. He ducked back inside to retrieve some jewellery and when he returned to his back seat another car pulled up parallel and the driver snuck out of the car and crept up from behind onto 50’s left hand side with his gun cocked and fired nine shots with a 9mm handgun from behind. With his hand on the steering wheel, 50 tried to reach for his gun but was shot in the hand entering at the base of the thumb and exiting through the pinky finger. Another bullet struck him in his hip, then his calf and chest. Another shot struck the vehicle and ricocheted into the left side of his face through the jaw and knocking a tooth out (as seen now with a scar in his left cheek which makes for a permanent dimple) and leaving bullet fragments embedded in his tongue. Further shots struck him in his forearm and lower bicep. Brown was wounded in the hand but managed to pull away, drove a few blocks and stopped to dump their weapon into a sewer and continued to the hospital. 50 says he was up and talking the whole way as the adrenaline pumping through his system kept the pain numb. He stayed in hospital for thirteen days and was confined to a walking frame for six weeks. He valued his life ten-fold now and began working on his body, turning it into a chiselled, raw thug-like LL Cool J physique accessorised with bullet wounds and tattoos to complete the invincible image he now portrays. The injury to his jaw and mouth left him with a distinct slur in his speech adding another element to his legend. This frightening reminder of what could have been is apparent every time he lays down vocals in his music.

"There's a different sound now when I talk, 'cause of the air around the tooth. Gettin' shot just totally fixed my instrument." Says 50 Cent, (Rolling Stones magazine, April 2003.)

Through various interviews and songs the shooter is rumoured to be Ken McGriff’s associate Darryl ‘Hommo’ Baum, whose nickname is derived from ‘homicide.’ Baum himself was shot three weeks after and consequently died as a result. 50 hinted this was in retaliation for the hit on him. Others claim Baum’s killing was as a result of an unrelated feud with another Brooklyn drug syndicate.

October 30th, 2002 JMJ record executive Jason Mizell, Jam Master Jay of Run DMC was murdered execution style, shot point-blank in the head in his Queens recording studio. Investigations believe the murder as a result of an ongoing ‘blacklisting’ of 50 Cent in the recording industry by the notorious Ken McGriff. Jam Master Jay defied this and took 50 Cent on-board as his protégée and therefore wound up murdered. 50 Cent was interviewed by police over the case but failed to cooperate in providing any information as to the suspects of the case. They further asked him about who he thought responsible for his own shooting of May 25th, 2000 but again he declined to provide any relevant information, instead mentioning that maybe the police should read his lyrics. He warned police of the danger that he had now hired a security team and that he feared for his safety.

The law enforcement agents investigating Murder Inc.’s illegal operation uncovered communication via pager messages of employees tracking 50 Cent’s whereabouts to Ken McGriff and his associates stating when he was in the New York area of Queens. On August 17th, 2002 Christopher Lorenzo, (Brother of label CEO Irv Gotti) informed McGriff of 50 Cent’s presence on Guy R. Brewer Boulevard in South Jamaica, Queens deep in the heart of Ken McGriff’s Supreme Team turf at the Baisley Housing Projects. Another occasion on September 5th, 2002 shows McGriff was informed again of 50 Cents whereabouts with record of a direct response from McGriff. These messages obtained by the authorities have been used as strong evidence to pursue Murder Inc.’s involvement in Ken McGriff’s criminal enterprise and the attempted murder of 50 Cent. On December 31st, 2002 New York police officers arrested 50 Cent and his armed bodyguard following a vehicle stop in Manhattan and charged them with possession of two firearms and four bullet proof vests.

Later in 2003 The Source magazine and Murder Inc. opened up a smear campaign against 50 Cent right before his début album was released. A restraining order document floated around the internet stating that 50 Cent had placed label CEO Irv Gotti and rapper Black Child in the document forging a belief that 50 Cent is a snitch (police informant).

50 Cent persisted boldly after his recovery teaming up with his new business partner Sha Money XL as the two headed out of New York and into Canada to safely bang out thirty-plus tracks in the studio to continue his mixtape library and fly his flag of defiance in the face of his enemies. His street-cred rose higher again almost to invincibility and by the end of spring, 2001 he’d released new material and together with unreleased tracks off ‘Power of a Dollar’ including the controversial "Fuck You" and "U Not Like Me" coming together for the independent mixtape LP, Guess Who’s Back released April 26, 2002. 50 stayed on the grind producing enough tracks to flood the market unlike any other MC only this time he retouched beats off classic hooks from released tracks from other artists such as Jay-Z and Raphael Saadiq with his lyrics added over the top. The red, white and blue bootleg, 50 Cent Is the Future was recorded introducing the original G-Unit members Lloyd Banks and Tony Yayo who guest appeared on the recordings. The album was released June 1, 2002 with DJ Whoo Kid and Kayslay producing it. Here hip-hop history was made, the record caught the attention of superstar MC Eminem and within a week he was quick to get on the New York radio circuit with the message that 50 Cent was his favourite rapper of the moment.

"One of the things that excited me about Tupac was even if he was rhymin' the simplest words in the world, you felt like he meant it and it came from his heart. That's the thing with 50, that same aura. That's been missing since we lost Pac and Biggie, the authenticity, the realness behind it." – Eminem.