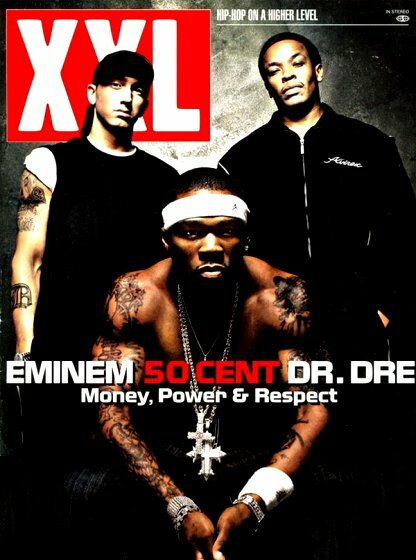 Get Rich Or Die Tryin'

50 Cent was picked up by Dr. Dre’s Aftermath Entertainment artist, Eminem who had signed a deal for a subsidiary label, Shady Records and he quickly grabbed 50 to headline his new label seeing him as being the new generation of hip-hop today. Eminem heard his New York mixtape, 50 Cent Is The Future with MTV rap aficionado Sway Calloway and promptly called 50’s lawyer to set up a meeting between the two stars in Los Angeles. 50 arrived and Em invited him to join him at some industry parties all weekend and tried to sell his plans for 50 to join Shady Records to him. Eminem asked him to hang around and meet Dre in an editing studio the following Monday. Evidently 50 Cent was astonished at his arrival at the front door to success and did not hesitate to sign with the legend’s Aftermath and Shady Records and was to have his record co-produced by the dream-team of Dre and Eminem. Before 50 began working in Interscope’s studios he released another mixtape, a bootleg record again collaborating with his Queens crew G-Unit entitled, No Mercy, No Fear with the single "Wanksta" written as a diss against Murder Inc’s rapper Ja Rule. Due to the rumours over his record deal with Shady/Aftermath, "Wanksta" quickly became the most requested song on New York radio in July 2002. Interscope capitalised on the appropriated song’s success and the hot track became the first appearance for Aftermath/Shady in Eminem’s 2002 8 Mile soundtrack with accompanying video clip which immediately went into heavy rotation on BET, MTV and radio stations across the country. 50 Cent certainly was the future in hip-hop and boosted by his parental rap upbringing of Run DMC’s Jam Master Jay, Eminem and the legendary Dr. Dre. In the wake of his acquisition, 50 Cent has become the hottest and most sought after neophyte since the summer of '94, when radio introduced the coming of Notorious B.I.G. He represented the new generation of pop culture, his hype was explosive!

In 2003 50 Cent began production of his début commercial album titled, Get Rich or Die Tryin with Eminem and Dr. Dre co-producing it. The first single released off the record was "In Da Club" produced and written by 50 Cent, Eminem, Dre and Mike Elizondo. This is one of the most listened to songs in the history of radio. By the second week of March 2003, Arbitron radio ratings estimated that during that week at some point 200 million people had listened to some or all of the song. "In Da Club" earned a Grammy nomination for Best Rap Song in 2004 and became Billboard Magazine’s number one single for the year. It debuted number one on the American, Canadian and Australian and third on the British charts. It was the first time since 1994 that an artist had both the number one song and album for the year (held previously by Ace of Base with "The Sign"). The video clip for the track portrayed 50 Cent exercising in a laboratory with both Eminem and Dr. Dre in white lab coats with clipboards observing him as their case study which is a fairly accurate analogy. 50 was sued for copyright infringement by former 2 Live Crew manager, Joe Weinberger on January 20, 2006. He owns the rights to the rap group's catalogue and claims that 50 Cent plagiarized lines from the song "It's Your Birthday" by former 2 Live Crew lead singer Luther Campbell, in his 1994 album "Still a Freak for Life". The next single released off the album was the R&B touched "21 Questions" written about a relationship between a newly-convicted felon in prison and his girlfriend on the outside. The smooth cut was produced by Midi Mafia featuring the G-Funk presence of Nate Dogg laying down soulful choruses over a Barry White classic hook, "It's Only Love Doing Its Thing" soon followed with great reaction debuting number one on the American charts again. The accompanying music video directed by Dre’s director on speed-dial, Philip G. Atwell shows 50 Cent arrested and hauled into prison where upon he tries to stay in close contact with his girlfriend played by Meagan Good while under duress from a rival convict harassing him played by model and actor Tyson Beckford. The video closes with 50 Cent back on the outside with his girlfriend watching Tyson’s character getting arrested as we are led to believe that 50 was originally wrongly-convicted. The video shares a similar screenplay to Nate Dogg’s own "Never Leave Me Alone". Cameo appearances come from G-Unit members and Nate Dogg. The follow-up single becomes 50’s second number-one single début on the charts, third in Australia and sixth in the U.K. The third released single entitled "P.I.M.P." became 50’s fourth single to hit the top ten also peaking at number-five on the U.K. chart and number two on Australian charts. The song was written by 50 Cent and produced by Denaun Porter. Later a remixed version added Snoop Dogg, Lloyd Banks and Young Buck to the track which saw very sexist lyrics accompanied with a full-frontal nude video of dancers centred on a table of celebrity pimps donning 50 Cent as one of their own. The Bishop Don Magic-Juan makes an appearance dressed in glitzy green with his pimp drinking mug. The fourth and final single off the album was "If I Can’t" proved good things come in threes, entering all the way at number 76 on the U.S. charts, although the U.K. saw it at number ten.

Within its first week of release the album sold 872,000 units, certified gold and a week later hit platinum with 2.1 million units sold. It broke the record for first week sales of any major label début in the entire Soundscan era. This became the dopest rap album since Eminem’s follow-up album and by April 12, 2004 Get Rich Or Die Tryin' became certified six times platinum by the RIAA. The début album also attained the Juno Award International Album of 2003, American Music Awards Favourite Rap/Hip-Hop Album of 2003. The 2004 Grammys further awarded 50 Cent with nominations in categories of Best New Artist General, Best Male Rap Solo Performance, Best Rap Album ‘Get Rich or Die Tryin’. After this apparent success Interscope granted him with his own label.
,br>