Following the height of success of his début commercial album, Interscope executive Jimmy Iovine granted 50 Cent with his own subsidiary record label. In 2003 G-Unit Records officially launched appointing 50‘s manager Sha Money XL as the president. The first signing to the label was his Queens based mixtape partners Lloyd Banks, Tony Yayo, Bang ‘Em Smurf and Domination as the established members of G-Unit. Later Tennessee’s Young Buck joined up. By 2004 R&B singer Olivia and mixtape DJ Whoo-Kid were also signed to the label. The Game joined G Unit as a promotional deal between 50 and Dr. Dre as a product of Aftermath/G Unit Records. Recently 50 cent added Spider Loc, New York’s own Mobb Deep, Mase and M.O.P. to his label growing into an empire of industry. The original artists’ Lloyd Banks, Tony Yayo and Young Buck all released their own solo projects under G-Unit’s banner.

Before the official release date of 50’s Get Rich or Die Tryin’ 50 Cent, Lloyd Banks and Tony Yayo were arrested for possession of firearms. Both 50 and Banks were released on probation but due to an outstanding warrant for weapons charges, Tony Yayo was forced to spend a year in prison for weapons violation. Upon release he wound up back inside for six months for possessing a forged passport. Since then he has remained on probation and required to remain in New York State making him ineligible to tour with G-Unit for 12 months. 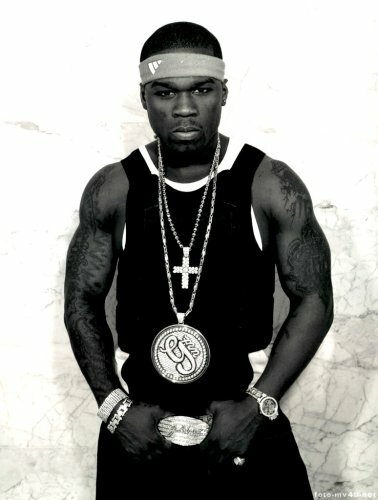 On March 3, 2005 50 was set to release his much-anticipated follow-up album ‘The Massacre’, originally entitled ‘St. Valentines Day Massacre’ but later changed it as the release date was set back from Valentine’s Day as it was deemed inappropriate for the occasion. The album was finally released on the 8th. The anticipation for this release held as much weight as Tupac’s post-prison ‘All Eyez On Me’ release and was set to be the dopest album since Biggie’s début.

"Disco Inferno" was the first single from The Massacre. The single peaked at number-three in the U.S. and was produced by Dr. Dre displaying his typical easy flowing melody rolling over strong beats that has encapsulated the west for the last twenty years. The music video had never been released on MTV but has found its way onto the internet. The clip is pornographic and takes place at a club in black-and-white with many undressing strippers. Artists Young Buck and Method Man appear briefly in the clip. The song was beaten by Kanye West’s "Gold Digger" at the Grammy Awards of 2006 for Best Rap Solo Performance. "Candy Shop" was the second released single off the follow-up, featuring G-Unit’s R&B starlet Olivia. The song was written by 50 Cent and Scott Storch and produced by Storch using the sample of The Salsoul Orchestra’s "Love Break" a sample already used on Eric B and Rakim’s famous track, "Paid in Full". The track caused ripples in the mainstream with faint sexual references to oral sex. The song was heavily censored on many commercial radio stations removing swearing and explicit sexual lyrics. Some downgraded the single as another rehashing of his collaboration with Lil’ Kim on "Magic Stick". The music video produced by Jesse Terrero was developed over the 11th and 12th of January in Hollywood showing 50 Cent driving into a mansion which turns out to be the so-called candy shop (another name for a brothel) with several attractive models inside including Lyric as the nurse, Chessika Cartwright (as the dominatrix) and Erica Mena (as girl in bed) and G-Unit’s own Olivia as lead dancer. Young Buck and Lil’ Scrappy make their appearances. At the end it shows 50 asleep in a fast-food drive-thru daydreaming about the event and Olivia working as the cashier waking him up. The video was nominated at the MTV Video Music Awards in 2005 for Best Male Video, losing to Kanye West’s "Jesus Walks". The single reached number one in the U.S. becoming his third number-one single and hit number four in the U.K. It was also nominated at the Grammy Awards of 2006 for Best Rap Song but only to be beaten for a third time by Kanye with ‘Diamonds From Sierra Leone’. It sat at number-one on the U.S. Billboard Hot 100 chart for nine weeks. "Just a Lil’ Bit" is the third single dropped from the album which reached number three in the U.S. charts and number ten in the U.K. Produced by Scott Storch and written by 50 Cent. The music video is set in the Caribbean and follows a plot with other men attempting to take advantage of 50’s entourage of women but it shows 50 getting back at them in the end. "Outta Control" is the fourth and final single from 50 Cent's second album which features Mobb Deep in their G-Unit introduction and the track later appeared on their G-Unit début album Blood Money. The single peaked at six in the U.S. charts and number seven in the U.K. It was written by 50 Cent, Dre, Mike Elizondo, Mobb Deep’s Prodigy and Havoc, M. Batson and S. Standard and produced by heavyweights Elizondo and the Godfather Dre himself. The track has a familiar Dre-touched head-nodding syrupy addictive whine to it which sets off Mobb Deep’s new career under Interscope. The video produced by Jesse Terrero is set in a nightclub featuring appearances from G-Unit’s Olivia, Young Buck and Tony Yaya. 50 and Mobb Deep sport T-shirts with the words “Game Over” symbolizing the departure of The Game from G-Unit over a continuing inter-label beef.

The Massacre hit number-one on the U.S. Billboard 200 Albums Chart and the U.K. Albums Chart that year and sold 1.15 million copies within its first four days of release. According to the figures produced by Nielsen Soundscan it became the sixth fastest-selling album since Soundscan began recording sales data in 1991. It also became the third best selling album of 2005 with 4.85 million copies sold worldwide. The Massacre was re-released in September 6, 2005 with a remixed version of "Outta Control" featuring Mobb Deep which included a bonus DVD with music videos for all of the tracks and a trailer for 50 Cent’s upcoming movie. 50 Cent lost out again to Kanye West’s Late Registration at the Grammys of 2006 for Best Rap Album.

"Piggy Bank" is the most controversial song since Tupac’s notorious "Hit ‘em Up" that blew up every enemy of Tupac’s across the music industry and there was a lot. This follows in similar ferocious format attacking long-time rival Ja Rule, Jadakiss and Fat Joe who worked with Ja Rule on his song ‘New York’, the track also aims at Shyne, Lil’ Kim and Nas.

JA RULE, JADAKISS & FAT JOE - In 2004 Ja Rule released a track for his R.U.L.E. album entitled "New York" which was well-received by fans with its heavy bass and edgy lyrics. The track featured New York’s Fat Joe and Jadakiss. This became a welcomed comeback into the public eye for the fading star that lost fame losing out to fellow Queens native 50’s verbal and physical attacks on his credibility and pride. Ja wasted no time in referring to the subject of his rap within the first few lines. Ja Rule referenced subtly to the tale of 50 Cent being a police informant in regards to Ja’s record label financier the notorious Ken McGriff and the Lorenzo brothers who run the label (Irving ‘Irv Gotti’ Lorenzo and his brother Rory Domingo Lorenzo). 50 Cent saw both Jada and Fat Joe siding with Ja in a predominantly 50 Cent dis-track and retaliated against all three in ‘Piggy Bank’. 50 also believed two collaborators have subliminally made reference to him in the past. 50 added insult to Fat Joe’s collaboration with his Terror Squad on the hit single ‘Lean Back’ which 50 accuses his rival of thinking his dance-smash hit was as successful as his own "In Da Club" sensation. 50 also rubs in his début album’s record sales over Fat Joe’s mediocre record sales in comparison.