SHYNE - New York’s Bad Boy rapper Shyne came under fire from 50 Cent originally when it was rumoured that he was in talks with joining Murder Inc. while he was incarcerated for the nightclub shoot-out involving P Diddy and his then-girlfriend Jennifer Lopez. 50 dissed Shyne on a mixtape freestyle. Shyne heard this and responded with an inside-prison phone freestyle recording where upon he threatened to handle their affair violently once he was released. This verbal threat saw him aimed at in 50’s commercial dis-track.

NAS – Back in 2003 another fellow Queens native Nas was rumoured to be in talks with Irv Gotti in regards to joining Murder Inc. but these proved to be incorrect but did not help strengthen ties between he and 50 Cent. Initially the Queens pair had been close professional associates before time tore them apart. 50 cites Nas as being too erratic in his behaviour and hard to trust. 50 also added that although Nas has in the past stood for peace… Except for his long standing feud with Jay-Z he was also the same person who verbally insulted Cam’ron, Nelly and Nore and Hot97 radio DJ Angie Martinez on June 27, 2002 without warning. Nas quickly turned to apologise those he attacked and reverted back to his peaceful ways. It is unclear if this is the sole reason for 50’s attack on Nas in ‘Piggy Bank’ but it is apparent Nas had made disparaging remarks against him prior to this track. At a free concert in Central Park, New York City Nas made a statement regarding the essence of 50 Cent’s music,

"This is that real New York shit, not that fake shit! Not that 50 Cent!" -This could be construed as 50 Cent’s main reason for adding Nas to the song.

The video for ‘Piggy Bank’ was computer animated featuring a parody of Fat Joe looking like the King Hippo character from Mike Tyson’s Punch-Out!! Jadakiss was made out like a Teenage Mutant Ninja Turtle and Nas as a henpecked husband literally chasing after his wife, R&B starlet, Kelis. The song was recorded before the internal rift between The Game and G-Unit as he was mentioned pro-G-Unit although a parody of The Game is shown as Mr. Potato.

Piggy Bank’s aftermath had Jadakiss and Fat Joe responding with their own freestyles. Jadakiss’ "Checkmate" and Fat Joe’s "My Fo’ Fo’" although Fat Joe declared that would be his only retaliation to 50 Cent, Jadakiss and his D-Block crew threatened to make the feud the cornerstone to their continuing careers. 50 responded to that in Tony Yayo’s "I Run N.Y." closing with 50 Cent mentioning the fact that Jadakiss still does not own the publishing rights to his own music and threatened to buy the rights from Bad Boy’s CEO P. Diddy who has always owned them. Soon after Jada and The Lox appeared on N.Y.C.’s Hot97 radio station and stated they would retire from recording music due to most of the money earned went to Bad Boy.

Despite stating he had only the one response Fat Joe attacked G-Unit once more at the 2005 MTV Video Music Awards by making a disparaging comment about G-Unit during his performance. 50 and G-Unit retaliated immediately by shouting obscenities toward Fat Joe and Terror Squad. Nas was the last to make a response for "Piggy Bank" on July ’05 with the song "Don’t Body Ya Self(MC Burial)" which taunted 50 Cent and his G-Unit crew by claiming their earlier dis-track was not directed toward Nas but his family because he was afraid to get into a war of words with Nas directly. He also threatened to end 50’s career and claims to be King of New York. Both 50 and Nas have yet to respond to each other.

Throughout the shoot-out 50 added that Ja Rule sings instead of rapping and should be regarded as an R&B singer. Ja Rule retaliated by accusing 50 Cent for insulting rappers to gain fame. Ja Rule eventually tried to squash the beef by using Minister Louis Farrakhan in a televised interview. Ja soon lost credibility when the interview was screened a day before his album Blood In My Eye was due to drop the streets. This lead 50 Cent to dismiss the affair as an obvious publicity stunt and therefore did not comment on the F.B.I. probe into his label Murder Inc. and Irv Gotti.

This spiralling beef between New York artists and affiliates turned inward to the Shady/Aftermath camp when 50 Cent had a falling out with Eminem’s former DJ Green Lantern who he labelled as being a snitch and traitor for his apparent phone call to Jadakiss. Lantern interviewed him over his feud with 50 Cent, encouraging the artist to deliver a major blow to 50 Cent. 50 never confronted the DJ about the situation but it did profoundly affect the relationship within Shady Records resulting in Green Lantern leaving Shady Records and other Eminem associated projects. 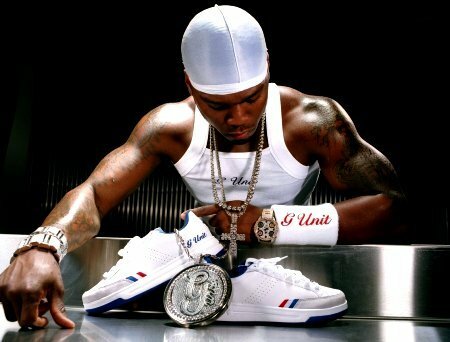 The ostensible protagonist has been capitalising on his multimedia trademark since his career blew up under Dr. Dre’s direction and has since released the G-Unit logo branched over to clothing, sneakers with Reebok and even bottled water. His latest venture saw him endorsing a video game called ’50 Cent: Bulletproof’ from Genuine Games available on Playstation 2 and Xbox platforms. The single-player game’s premise centres on 50 Cent with his gangster persona dealing with his controversial real-life drama seeking vengeance as he fights his way through the criminal underworld to hunt down the men who are responsible for shooting him treading carefully so as not to resemble the actual suspected perpetrators of the real-life attempted murder incident. The video also stars Eminem as a corrupt cop, Dr. Dre as an arms dealer and G-Unit’s Tony Yayo, Young Buck and Lloyd Banks make up 50’s gang. The video game was officially released on November 17, 2005 accompanied with a soundtrack released by Shadyville Entertainment and produced by DJ Whoo Kid. It contains several new songs including ‘I'm a Rida’ and ‘P.I.M.P. Pt.2’ The song ‘Maybe We Crazy’ won "Best Original Song" in the 2005 Spike TV Video Game Awards.

Despite the video game carrying as ESRB rating of “Mature” and not for children at all 50 Cent claims the video game is educational teaching young kids how bad gang-life really can be as a point of discouraging it. Of course many political leaders claim Bulletproof warrants no educational basis and deem it a very violent nonsensical game. The game received poor reviews, Gametab rated it only 49% noting game-play problems and earned Xplay’s “Worst Game for the PS2” award. However due again to the 50 Cent trademark it has sold over two million copies in the U.S. with many countries including Australia banning the product due to exceeding the MA15+ rating which is the highest rating outside of the U.S. Later a cut version was submitted and has since been approved for retail sale.

Prior to the release of GTA: San Andreas 50 Cent expressed a strong desire to feature in the game a major role. Rockstar denied he would take part in the video game. Allegedly approached other gaming companies to make his own game, hence the seeding of the idea to branch his trademark into the video game world with the end product being Bulletproof.