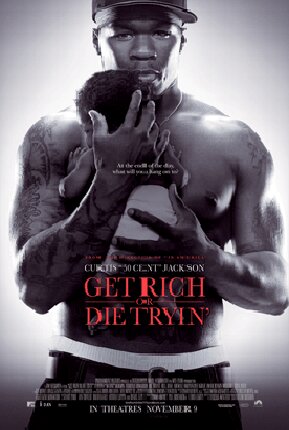 Straight after the release of his follow-up album 50 Cent was set to open up a career as an actor starring in his some-what autobiographical film ‘Get Rich or Die Tryin’’ not unlike Eminem's ‘8 Mile’. The filming was split between New York City and Toronto and released on November 9, 2005. The original name was Locked & Loaded, but the title was changed by 50 Cent to the same name as his debut album. The film details his violent and controversial life on the streets of Southside Jamaica Queens, New York City.Directed by Jim Sheridan and co-starring Bill Duke, Joe Bryant and Terrance Howard 50 plays Marcus Grier, a drug dealer aspiring to be a rapper. We are introduced to the character as a young boy abandoned by his mother constantly left in the care of his grandparents and eventually orphaned. He in turn takes to being a notorious drug dealer in the same ghetto-jungle as his mother scratched and much like his real life makes it out to become a successful recording artist. The movie holds stage for a character named Majestic as the Drug Lord quite possibly centred on Kenneth ‘Supreme’ McGriff. The chilling and very gripping accounts through the film help the viewer to understand the passion and realism of 50 Cent’s professional life.

The movie received a majority of negative reviews, marking the rise-to-fame plot as too familiar and tiresome with a less than impressive acting debut of Curtis Jackson. It has become one of the lowest rated films on the Internet Movie Database with a destroying 2.9 out of 10 as of June 2006 and has sat comfortably on the bottom 100 films list. Rotten Tomatoes carried a low 17% positive review posting. Despite making $12 million in its first weekend the film was expected to be carried by 50’s strong popularity within the hip-hop industry but with negative press and general disinterest sales were way under expectation with a $40 million budget grossing a domestic $30,984,537 with additional $15,367,487 in foreign sales making it a disastrous box office bomb.

Accompanying the film was the soundtrack from G-Unit/Shady/Aftermath/Interscope Records released November 8, 2005 with the first hit single ‘Hustler’s Ambition’ a personal favourite off the album of 50’s. The song details the rough upbringing in Southside Jamaica Queens surviving as a hustler by any means possible. The track contains elements from Frankie Beverly & Maze’s song ‘I Need You’. The video was shot in London, U.K. showing 50 coming into a training gym to train as a boxer with a boxing match at the end which 50 walks away from guest appearing his real-life grandfather as his trainer. The video shows trailers from the film. The track is heard at the end of the film as 50’s character performs it live on-stage. The 12” single also contained a live recording of ‘In Da Club’. ‘Window Shopper’ was the second single from the soundtrack and hit the U.S. charts at number 11. It contains a sample from Bob Marley’s ‘Burnin' and Lootin’. The song is essentially about wealth and the ever-present bling. Filmed on location in Monte Carlo, Monaco and centred on the famous casino and surrounding restaurants and shops with the G-Unit soldiers including Mase gloating over over-priced purchases of expensive jewellery, cars and meals. 50 buys a $1,000,000 Maserati MC12, Mase a $500 milkshake and $300 cheeseburger.

Before the release of his movie, Get Rich or Die Tryin’ controversy exploded over advertising billboards placed near schools featuring 50 Cent holding a gun in one hand and a microphone in the other. Protesters targeted Paramount Pictures in Los Angeles and Clear Channel in Philadelphia to the point where some were removed.

Other posters across the world were changed to depict 50 Cent cradling a baby boy in his arms. On the opening night, Shelton Flowers, 30 was fatally shot to death after an argument with another man near the concession stand inside a Loews multiplex in Homestead, Pennsylvania after a screening of the movie. In response, National Amusements theatre chain ended after-midnight screenings of the film, fearing further unrest relating to the nature of the films content.

Conservative commentator Bill O’Reilly from The O’Reilly Factor urged boycotts against rap music as a whole industry while taping a show. He specifically used 50 Cent as a target of his crusade to prevent rappers who promote violence from endorsing mainstream merchandise. He criticized the Reebok Corporation for sponsoring 50 Cent and allowing him to open and endorse his own line of sneakers, G-Unit Sneakers. O’Reilly moved forward with his boycott against Reebok, despite this, sales remain sky-high and the shoe company continue to endorse 50 Cent’s image branching further out to endorse other controversial recording artists and outstanding athletes. However a television commercial for Reebok starring 50 Cent and Jay-Z was recently taken off air in the U.K. as the commercial contained lyrics from one of 50’s songs which resulted in complaints against “their violent imagery of life.” Like before, sales remain undeterred by the crusade against them, proving that any controversy makes for excellent marketing as history has shown us in hip-hop merchandising.

Dan McTeague (member of Canadian Parliament) put forward a request to the government that rapper 50 Cent be banned from entering the country to perform. He stated that the rapper’s message was inappropriate at a time when its largest city Toronto was experiencing a huge increase in gun violence. Despite this 50’s Canadian tour went ahead as scheduled and once again served to sell more tickets for his concerts. All publicity is good publicity in the end.