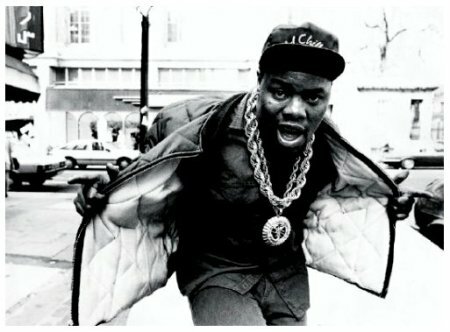 Biz Markie is an original member of the Juice Crew and considered one of the most humorous and comedic cartoon-like rappers in hip-hop. Nicknamed either The Diabolical One or the Clown Prince of hip-hop, Biz was a human beat box pioneer and remains today a prominent Harlem leader of hip-hop.

Born in Harlem, Marcel Hall grew up learning the electric keyboard and gaining a respect of broad genres of music. He met producer and radio jock, Marley Marl who was mixing tracks for the Juice Crew and began his career performing as a human beatbox for Juice members MC Shan, then Roxanne Shante. By ’88 he had recorded his first set of demos produced by Marl and subsequently signed with Cold Chillin’ Records. Later that year Biz released his comic album, ‘Goin’ Off’ that gained notoriety via word of mouth and airplay on Marl’s radio show with Mr. Magic on WBLS. Underground hit songs co-written by Big Daddy Kane, "The Vapors", "Pickin’ Boogers" And ‘Make the Music with your Mouth Biz.’ By 1989 he was received by the mainstream with ‘Just a Friend’ single with out of tune sung choruses. This reached the Top Ten pop charts together with the accompanying gold selling album, The Biz Never Sleeps.

Taken as a chubby jokester in an ill-fitting t-shirt, Biz had parties celebrating his gimmick hits becoming popular soundtracks for kids who danced the popular moves of the Wop. It wasn’t until he dropped the serious ghetto commentary of the rise to fame describing how badly disrespected stars were before they became famous in the hit "Vapors". Using the samples of James Brown’s ‘Papa Don’t Take no Mess’. The video quickly earned heavy rotation on New York City’s ‘Video Music Box’ show.

Sitting atop the high fame as the clown prince of hip-hop, Biz was under heavy pressure to release his third album, I Need a Haircut, a legally challenged project, the album failed to meet sales requirements due to being pulled from shelves when Biz lost a lawsuit from Upright Music Ltd. with Gilbert O’Sullivan who claims the track ‘Alone Again’ featured an unauthorized sample from his own track of the same name. This ruling drastically changed the rules for the rap community and copyright laws. Warner Brothers, the parent company of Cold Chillin’ had to pull the album from circulation and in future all companies had to clear sampling before being released.

By 1993 Biz had come back with another album, ironically titled All Samples Cleared! but the next wave of stars had left Biz in their wake, and after being bruised by the lawsuit the record was a failure. This kept Biz out of the spotlight for the following decade with occasional guest appearances on Beastie Boys records. This collaboration brought Biz back onto the scene raising his profile. However Biz became a DJ rather than recording his own tracks. In 1996 he was filmed performing freestyle on MTV2. He also appeared on tracks with Canadian urban rock/rap group Len and worked alongside Will Smith on his album Willenium.

By 2003 Biz released Weekend Warrior for Tommy Boy. Also in ’05 he was a contestant on the US show Celebrity Fit Club which challenges former celebrities to lose weight with diet and exercise. Biz Markie lost considerable weight and successfully won the contest. He had a cameo appearance in Will Smith and Tommy Lee Jones’ film Men in Black II. His career as a DJ is still continuing strong. He was also in an episode of the Andy Milonakis television show playing the rap fairy who said, "at this point in time I grant you the powers of rap and rhyme."