Ice Cube came back from a long period touring with N.W.A. across the country ending with near riots he returned to his parents’ house in South Central to his own bedroom he grew up in as a teenager. He was back to daily chores of washing dishes and taking out the trash. His house was the target of mistaken address in a drive-bye shooting and it made him wonder why he was still at home without being paid for his explosive new recording and performing career. With two albums to his credit selling over 3 million copies and a tour that grossed $650,000 Cube approached Jerry Heller to inquire about his cut and other N.W.A. merchandise sold on tour he was told to leave it be and only received $23,000.

“Jerry lives in a half-million dollar house in Westlake and I’m still living at home with my mother. Jerry’s driving a Corvette and Mercedes-Benz and I’ve got a Suzuki Sidekick. Jerry's making all the money and I'm not. Jerry has no creative input into the group: he just makes all the fucked-up decisions and gets all the fucking money.” - Cube told Frank Owen. 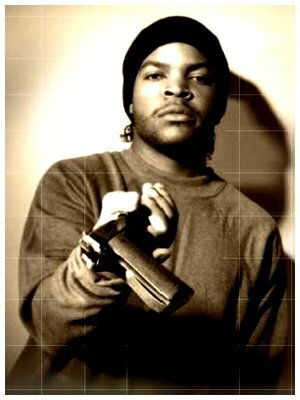 Cube was owed it least a further $120,000 in royalties but never received a cent. He had all good intentions on continuing with the group if the reasonable financial demands were met but in any situation if you are not getting paid for your work, you down-tools and seek employment elsewhere. After a San Diego show in August of ’89 Cube walked away from the super group and left the west coast to shine without him.

Solo with The Bomb Squad

“I just thought at the time there was two producers that was even worth fucking with – Dr. Dre and the Bomb Squad. If I couldn’t get Dre, I was going to the Bomb Squad.”

Ice Cube hired his own layers and accountants and headed off to the east coast with his homeboys from the Lench Mob comprised of South Central locals who grew up around Cube during his formative years in the rap game. He matured from the teen angst of NWA’s purpose and found mentors in Public Enemy’s Chuck D and the S1Ws who gave him inspiring Nation of Islam books to read. Together with this he began listening intently to the speeches of Minister Louis Farrakhan and the militant translations of Khalid Mohammed. This expanded his mind and armed Cube with his most powerful weapon to date, knowledge where upon he would turn his lyrical direction into a vehicle for a highly-motivated political purpose rather than spitting gangsta-fairytales used to locate himself in South Central. This opened up a whole new world for him and his career. He worked with Public Enemy’s production team The Bomb Squad just after they finished work on Fear of a Black Planet. Cube’s first solo project saw him eager to flaunt his flawless natural talent of rhyme and newly-gained comprehension of Farrakhan-like nationalism.

“The Bomb Squad thing was – Bring us the groceries, we’ll cook it.” - Cube told Vibe in September ’06.

This new era came about when Cube was sitting in the Def Jam offices searching for New York producer for Run DMC and 3rd Bass, Sam Sever when he saw Chuck D who was surprised to hear news of Cube splitting from N.W.A. super group. Fate had brought Cube and Chuck’s Bomb Squad together. They instructed Cube to go into their Long Island warehouse filled with crates of records, spending two weeks picking out albums to sample for his new solo ambition. The auspicious east-west union had taken its first steps to inauguration. Cube worked with The Bomb Squad’s Hank Shocklee and Eric Saddler together with his long-time rhyme crew Sir Jinx and the Lench Mob to churn out one of hip-hop’s all-time most celebrated solo projects.

His first album, AmeriKKKa’s Most Wanted was completed in February 1990. Timed perfectly with the popularity boom in the mainstream scene, it was an instantaneous hit. Guest appearances from Flavor Flav and Chuck-D from Public Enemy furthered the album’s notoriety. Ice Cube opened his controversial writing, turning his focus on ghetto truths and police harassment. Despite this the album was a huge success going triple platinum showing the diverse array of records sampled throughout the album ranging eclectically from the ever-present Parliament funk-bounce, Stevie Wonder, The Honey-Drippers and James Brown cultural anthems to the Average White Band’s more afro-centric flavours, Billy Squier, The Turtles and even a Disney kids track. On the tale ‘Once Upon a Time in the Projects’ Cube narrates over "Shoo-B-Doop and Cop Him" by Betty Davis about a naïve brother paying a girl a visit in a public housing apartment, only to find himself in residence of inequity with a mother who has neglected her son to the gang-life, and left the other to run riot in dirty nappies while she cooks crack-cocaine in the kitchen. This openly showcased Cube’s outrageous discontent for the government insulting the weak-minded poor black communities with their substandard handouts. "You Can’t Fade Me/JD's Gafflin’" kicked off Cube’s misogynist controversial career against the black woman. He depicts the scenario of an unemployed knucklehead drunk impregnating a one-night-stand ‘neighbourhood hussy’ who intends on sticking him with child support with unimaginable solutions to terminating the pregnancy by “kicking the bitch in the tummy” and “going in the closet, looking for the hanger”. It turns out the baby is not his to which he takes great delight in. Ice Cube’s solo performance and accuracy of his weapon of knowledge lead every track to be an unmistakable success. In 1990 The Billboard Top 200 entered the album at number 19 and number 6 on the Top R&B/Hip-Hop Albums list. The album-titled, AmeriKKKa's Most Wanted track hit the number 1 spot on the Hot Rap Singles.

Together Cube and Bomb Squad soon followed AmeriKKKa’s pinnacle and released the EP, Kill At Will on July 1st, 1990 releasing tracks, "Dead Homiez" a tale describing the irony of black people attending funerals for the generation of destructive youths fallen prey to gang homicide and the track, "Jackin' for Beats" which served to highlight The Bomb Squad’s aesthetic talent with nineteen mixed-in samples from B.T. Express, Bobby Byrd, Zapp to modern slam-hits of Digital Underground's Humpty and Public Enemy’s "Welcome to the Terrordome". "The Product" introduces the issues of street-dealing and cooking up crack-cocaine. Chuck-D and Flavor Flav guest-appear to reinforce the strength of Cube’s east coast partnership.