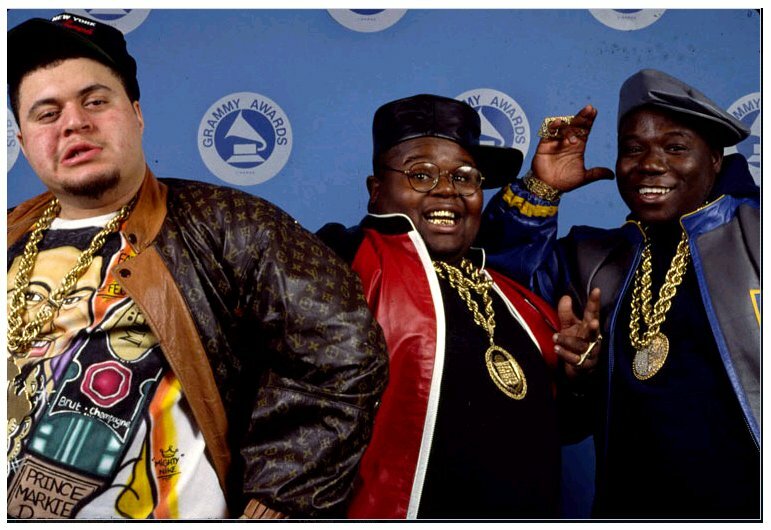 The Fat Boys left a major impression on popular mainstream rap of the early ‘80s. One of the first groups to actually showcase the human beatbox artform over comedic rapping, The Fat Boys presented themselves humorously as a rap group known for poking fun at their own weight problems rather than looking sharp with the coolest image that seemed to be a marketing-must at the time. The human beatbox was perfected by Darren Robinson and became the first to record this vocalization. The Fat Boys played an important role in the early foundation of emcees taking over hip-hop.

The three members, The Human Beat Box, Prince Markie Dee and Kool Rock-ski all grew up rapping in the same neighbourhood. Darren perfected the talented technique of making percussion-like sounds with his voice box and mouth. As his parents could not afford a drum machine, he was left with no option hence why Darren Robinson was called The Human Beatbox. Before 1984 known then as the Disco 3, the group entered the Coca-Cola/Tin Pan Apple rap contest at Radio City Music Hall and won the event hands down. First prize was a record contract, second prize was a stereo, and the group wanted the stereo! They were somewhat disappointed. However shortly after winning the contest, in October 1983 their first single, "Reality", was released on Sutra Records. The Human Beat Box (also known as ‘Buff Love,’ ‘Doc Nice,’ and ‘The Ox That Rocks’), provided a rhythm track that was a first in recorded vocalization.

The group earned their famous name of The Fat Boys when during a European tour, their manager Chris Stettler was presented with a $350 bill for extra breakfasts. The name seemed fitting after this. Soon after they dropped their second single "Fat Boys" and was released in May 1984 kicking off with The Human Beatbox performing his vocal beatbox and then bringing in the 808 which was at the time, the B-Boy drum machine of choice. Prince Markie Dee and Kool Ski-Rock busted out the lyrics of "I'm overweight but it ain't no thing, because I'm always fresh and guaranteed to pass any MC contest."

The song was backed with a smooth keyboard bass line and syncopated hand-clap snare drums. This track became the hottest and most requested in New York and remained in the Top 15 for an impressive 18 weeks as it swept across the country playing in clubs and radio shows. The video's celebration painting the ever-present image of their overeating fed the group's growing fan base. During the height of this popularity The Fat Boys joined Whodini, LL Cool J, and Run-D.M.C. to form the first major hip-hop concert tour, the Swatch Fresh Fest. The crew was really starting to expand publicly.

"The Fat Boys were major stars! They took this art form to another level. Five sold-out Fresh Fest Tours! Incredible. We had a chance to introduce the group at their first show in Patterson, New Jersey, with the Cold Crush Brothers, and they tore the roof down! They added the visual element of the show to hip-hop. With the Fresh Fests you had the hard-core style of Run-D.M.C., the smooth, mack-daddy style of Whodini, the comedic style of the Fat Boys. They really created a niche for themselves."

–The Awesome 2 reflecting on The Fresh Fest tour.

The Fat Boys were immortalized from their performance on the Krush Groove film about Def Jam’s CEO Russell Simmons and Run DMC. The Fat Boys showcased their appeal at a performance in high school, after being kicked out of science class for disruptive beatboxing and again at a rap contest where they imitated their real-life accounts of the Coca-Cola/Tin Pan Apple contest Radio City Music Hall. Later they starred in their own comedy film, The Disorderlies.

By early 1995 Darren Robinson was diagnosed with lymphedema, a rare crippling disease. On December 10th, 1995, Robinson passed away at 28 years young from cardiac arrest during a severe bout with respiratory flu. Prior to his death he was working on a production deal with Sony as well as a Fat Boys reunion album. The two surviving members plan on completing the album using the vocals Robinson cut prior to his death.

The Fat Boys have left one of the greatest impressions on hip-hop. They represent a positive, fun era in hip-hop. Their inspiring and creative work made us smile at the lighter side of life, never presenting the bad imagery of guns, drugs and disrespect of the law. They gave us a sense of appreciation for the humour in our lives despite the hardships we struggle through. For this made the trio ground-breaking.

“The Fat Boys made us laugh at ourselves as well as think about the consequences of our actions. They possessed what many rap artists’ today lack - creativity. On stage, video, and wax, the Fat Boys stretched the stereotypical boundaries of machismo and dared rappers to challenge their untapped creative potential. It saddens me that some up-and-coming producers haven't sampled tracks like "Can You Feel I" or "In the House"; both sound just as fresh today as they did ten years ago.” - Words by Barry "Rockbarry" Benson 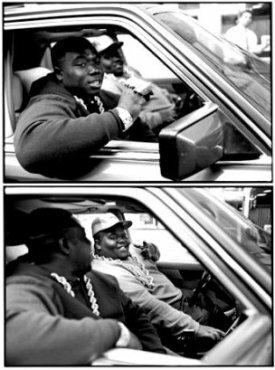