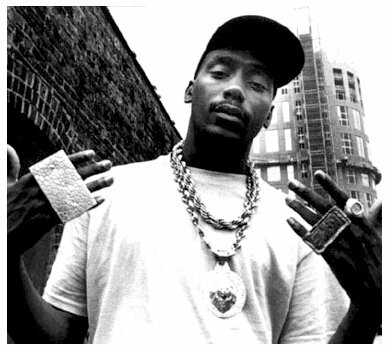 Big Daddy Kane is today regarded as a legendary lyricist and rap icon of Brooklyn New York and across the global community of hip-hop. Faded by rising stars and seasons of ever changing faces of the rap genre, his image is continually remodelled through the post-generation of artists. Kane stood tall in custom designed suits with a creamy chocolate complexion and hi-top faded haircut giving him a majestic aura and oozing coolness that left him forever immortalized as an iconic sex symbol and the original ladies man. A playboy who gave the rap industry sex appeal, Kane was a smooth operator in the old school of rap music.

Kane, (King Asiatic Nobody Equals) grew up in the notorious section of Brooklyn, in Bed-Stuy. Kane was educated first hand in the rapidly expanding culture, embracing hip-hop for his own disposal of. He found strong influence in the lyrical proficiency of Grandmaster Caz from the Cold Crush Brothers. As a late teenager he joined the local group called the Juice Crew headed by legendary Marley Marl. He was a writer for many peers in the game, Biz Markie and Roxanne Shante who who were Juice Crew members also. He solely wrote the majority of lyrics for Biz Markie he opened his vocal abilities on Biz’s track, ‘Just Rhymin’ with Biz’ soon to be a mere glimpse of the Kane’s ferocious flurry of poetry. His first single dropped early 1987 called ‘Raw’ a nonstop barrage of abuse upon the mic without a pause for breath, Kane had proven he had what it takes and beyond and stole centre spotlight from the Juice Crew only to pursue a solo identity. He soon dropped his second single forcing us to recognize another facet to his repertoire by way of a smooth, silk wrapped performance, ‘Ain’t No Half Steppin’’. Hank Shocklee of the Bomb Squad had said, “Kane is like a Jedi rapper.” This side of Kane showed he was not always showing off a hyperactive rap to dominate but sincerely proclaimed his reign over his peers through whispered lyrics, “Competition I just devour/Like a pit bull against a Chihuahua” and the boastful “Steppin’ to me that’s a wrong move/ So what you on huh?/Dope or dog food.” His delivery was confident and composed.

At this heightened climax of Kane’s career strolled the stage with an Islamic militant equanimity providing his young black market proud guidance. His alignment with the Five Percent nation of Islam meant he was to represent a pro-black mystique barring all distractions his lifestyle serves. This black midnight stature only placated the women with untapped sexuality. Kane was swallowed whole by this new branch of fame. He began wearing tailored designer suits and sipping champagne dripping with females off his arms. By the time his third single ‘Set it Off’ was out he was the new archetype of a ladies man. Gossip of selling out and crossing over to R&B contemporary music, his subject matter was swerving from political rebellion to ‘All Of Me’ collaborating with the late, great Barry White with very soft sweet lyrics to the ladies. The altitude of his downfall steadily decreased with an off-side project with singer, Madonna and her infamous sex book displaying his shiny black booty in nude shots. Together with photo shoots with Playgirl magazine, this was not the pro-black stance that gave him his Malcolm X reputation in the rap community. The 90’s saw Kane heavily overshadowed by the emerging hardcore gangsta rap category dominance. Later album, ‘Looks Like a Job For…’ was an acclaimed release for 1993 but never did he surpass the greatness of his reign over the golden age of hip-hop from 1986 to ’89.

By 1996 Kane was still touring to crowds of old school appreciation and working on several projects with DJs sampling old hip-hop and had appeared in Mario Van Peeble’s western Blaxploitation movie, ‘Posse’. During 1996 Kane had been rumored to be joining the Death Row label heading their east coast New York venture alongside Wu Tang Clan and Rakim. Kane had worked with Death Row star, Tupac and Kam on the track, ‘Wherever U Are’. In 2002 Kane was working alongside underground alternative DJs Alchemist and DJ Babu who produced his latest solo release, ‘The Man, The Icon’.

Big Daddy Kane is remembered for his influence on today’s rap music allowing the marketability of sex appeal to invade the business of hip-hop music. The dopest rhyme spitter and ghost writer from the golden age, and the original Pimpin’ Ain’t Easy philosophy, all due respect and Long Live the Kane.