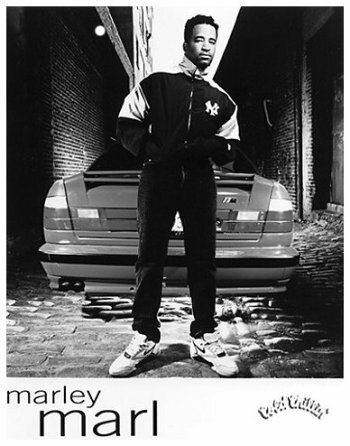 Marley Marl is a radio DJ turned super producer and Record label CEO representing the ethnicity of Queensbridge New York at a time where the only vibe on the street stemmed from the Boogie Down South Bronx constituency. Heading up The Juice Crew, Marl propelled the careers of some of the greatest hip-hop icons of the culture. He was an innovator of his production techniques with synthetic beats and sampling unique to the industry standards. From influences in electronic production to complex sampling Marl carried this trait through the work of The Juice Crew who was assembled to support this novel blueprint in hip-hop.

Marl’s earliest influence came from his own home his older brother was Larry Larr, member of Hi-Fidelity a park performance group who would keep equipment in the basement. After cautioning his brother not to touch any of their gear, Marl would switch on the power and warm up the turntables in order to imitate his brother’s work. He was ten to eleven years young. In the city of New York, he was a hyperactive child and therefore sent to a special education school that housed anyone from dyslexic to abusive bullies. It was at Manhattan High School where Marl met Breakout from the Bronx who carried with him tapes from a crew of DJs and MCs honing their undeveloped skills. Impressed with this, Marl formed his own crew called the Sureshot Crew in 1977 who battled other crews, representing the Queensbridge had started the campaign. During the following teenage years, Marl would spend evenings spinning disco records and rap jams at River Park or the Jacob Riis recreation hub. His first break would come via his girlfriend Crystal Smith who was down with Marl’s DJing prowess and became increasingly inspired to start her own rap career as Dimples D. Marl would later produce her breakthrough hit.

During 1982 Marl had secured an internship with Unique Studios under the wings of Arthur Baker whose production credits include remixing Afrika Bambaataa’s early recordings, Madonna, New Order and many more. Marl was schooled off Baker’s production techniques and had worked on Crystal Smith’s ‘Sucker DJ’s’ track taken complimentary from Run DMC huge smash hit, ‘Sucker MC’s’. Convinced he should sell the rights to the recording, Dimples D’s one time hit became the rights of small label, Party Time sold for $6,000. With his cut Marl purchased a Roland 808 drum machine. Every time Marl earned any money he would inject it back into buying more equipment in which to diversify his skills as a studio lab technician.

Two years later Marl had joined up with flamboyant and very arrogant radio personality, Mr. Magic who aired his show on Friday and Saturday evenings 9pm till midnight on WBLS called ‘Mr. Magic Rap Attack’. This was a pioneering hip-hop show on a black owned radio station known for its predominantly R&B promotion. Marl would assume duties as resident DJ ‘Engineer All Star’. This show rivaled DJ Red Alert’s own radio show aired on KISS-FM. Mr. Magic’s show overshadowed the airwaves becoming the most influential hip-hop program in the tri-state area. As Magic’s DJ Marl was forced to play the brightest stars of the moment, and the spotlight belonged to Kurtis Blow who was already becoming a powerhouse in production working for Russell Simmons’ Fat Boys, AJ Scratch and LL Cool J projects, Marl did not appreciate the weak inferior sounds characteristic of Blow and felt compelled to put his own techniques out and establish his hometown on the map and reformat the escalating tornado of hip-hop crashing through every mainstream trend.

Marl had converted his sister’s Queensbridge apartment into a basic recording studio he called the ‘House of Hits’. Insisting on altering the format of already established trend of production set by Kurtis Blow following suit of late disco and smooth party jams, his crackled speakers and popping vinyl scratches gave Marley marl the distinctive reputation for raw, dirty sub-par quality recordings contributed by his inner city surroundings of screeching subway trains and traffic. In ‘Hip Hop America’ Nelson George called this a dusty quality of production. Marl picked up an essential part of his repertoire while studying underneath Baker at Unique, sampling records. When trying to extract a vocal off an emulator a sneer sound was captured, he then realized instead of relying upon the DMX bland beats he could rip off any drumming from a record and re use it for his own production. Immediately he went out and bought a cheap sampler he still uses to this day. At this juncture there were no sampling laws so the selection was endless.

Marl assembled the Juice Crew to demonstrate and execute his new ideas of production and sampling. Still driven to promote his Queensbridge neighbourhood Juice consisted of varying personalities and home-grown virtuosos. Biz Markie, Roxanne Shanté, Big Daddy Kane, and later joining were Kool G Rap & DJ Polo, Masta Ace, Craig G and Tragedy. This unparalleled producing was starting to be recognized through his stars performances. Most producers and DJs at the time took a back-seat with the light shining on the MCs alone. Marl’s distinctive techniques forced him to be acknowledged as an integral member of Juice Crew. This in turn gave accreditation back to aspiring producers and DJs who worked tirelessly behind the scenes to give the glory to the performers. Mega star producers like RZA and P. Diddy modelled their careers and those under their production on the early 80’s workings of Marley Marl.