This left Rule and 50 continuously going at each other on wax. Shots fired off on mixtapes from both sides including Black Child, Caddilac Tah, and Irv Gotti on Murder Inc., and all of G-Unit on 50 Cent's side. (The G-Unit phenom had not yet caught wind while Ja Rule was busy doing work with the likes of Jay-Z and DMX, who eventually entered the feud on his debut and second albums. In 2000, Inc. associate - Kenneth McGriff became increasingly angry at 50 Cent because of the yet-to-be-released album Power of the Dollar, because of the track 'Ghetto Qu'ran' an infamous lyrical assault on McGriff's organisation, criminal exploits and cohorts, named in the track. McGriff put out a contract out on 50 Cent's murder. 50 later survived an attempted murder when he was ambushed outside his grandmother's home in Queens by a gunman. He suffered nine shots to the body, arm and face. Investigators believed the incident was tied to McGriff. However, the case is still unsolved as of 2009. During this tumultuous period, Ja Rule sold his catalogue of albums very well, but not long after 50 Cent signed to a major label. 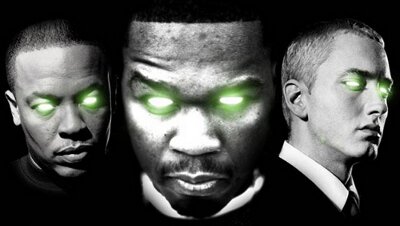 In 2002 50 signed to Eminem's Shady Records and Aftermath Entertainment. This changed the public spat with Murder Inc. forever. This left Ja Rule crippled in comparison. Soon after that, Ja Rule was a guest in a talk show and he warned Dr. Dre and Eminem to not release any of the 'diss' songs aimed at Murder Inc. because of 50 Cent's involvement between the two rappers. The two did not send any kind of direct or indirect diss track to Murder Inc., listening to Ja. However, Dr. Dre was the one who produced 50 Cent's vicious track 'Back Down' in 2003 from the album Get Rich Or Die Tryin', which not only called out Murder Inc., but 50 was extremely disrespectful towards Ja's mother, wife and kids. In the song 50 rhymes:

"Your mami, your papi, that bitch you chasin' your lil dirty ass kids, i'll fuckin' erase them."

This then gave Ja Rule the obvious notion to reply back to Eminem and Dre. After that, Ja Rule decided to attack Dr. Dre and Eminem. He did it in his infamous and centrepiece diss track 'Loose Change'. In the song, he not only made fun of 50 Cent, Eminem (he called him Feminem), and Dr. Dre (he had called him a bisexual and claimed that Suge Knight knew of Dre bringing transvestites home), but he had also dissed his friend Busta Rhymes who signed to Aftermath at that time. The track also insulted Eminem's daughter, Hailie, by saying that she'll grow up to be a slut or a drug addict like Eminem's ex-wife Kimberly Anne Scott and mother Debbie. The lyrics insulting her are:

"Em you claim your mother's a crackhead and Kim is a known slut, so what's Hailie gonna be when she grows up?"

This insulted Eminem deeply, causing Em to immediately get his rap group D12 involved, as well as the major part of his label, Shady Records, including Obie Trice, his close friend. Dr. Dre then joined in the feud to fire back at Ja Rule. The two labels together then sent an onslaught of disses towards Ja Rule throughout the middle of 2003, attacking his, Irv Gotti's, Black Child's, and Murder Inc.'s credibility in general. Later on in the year Ja Rule released his 'hate' album Blood in My Eye which was dedicated to dissing Shady/Aftermath back in favor. Blood in My Eye was originally a mixtape intended for the streets only, but Murder Inc. had ordered Ja to release an album each year based on the requirements of his contract, and so Ja Rule made the mixtape an album. The album severely diminished Ja Rule's popularity, and during this time 50 Cent was selling multi-platinum with his album Get Rich or Die Tryin' (in fact, it sold 6x platinum at the end of 2003). With just one diss in "Loose Change," Ja Rule had brought two record labels against him and his own record label. From then on, in 2004, Ja released his highly-successful comeback, R.U.L.E.. The album featured the hardcore street anthem "New York. and the classic "Wonderful featuring R&B legend R.Kelly." The hit song was well received in Europe especially England and went straight to the top spot, something only 11 hip hop artists have managed including LL Cool J, Tupac, Eminem, The Notorious B.I.G and Nelly.

"New York" featured Fat Joe and Jadakiss. In the song, Ja Rule would throw a subliminal shot towards 50 Cent. 50, in turn would go on to diss both Fat Joe and Jadakiss. This would bring them into the feud, numerous disses were now being hurled at G-Unit from all directions. Jadakiss would soon back out of the feud, while Nas would come into it with many disses aimed at 50 Cent. Other Murder Inc. artists would step into the feud as Ja Rule made peace with Busta Rhymes, Dr. Dre, and Eminem. The Game would soon have a falling out with 50 and G-Unit, which led to him siding with Murder Inc. in the feud. Toward the end of 2005, the feud calmed down until Ja Rule disses 50 in 2007 on a remix to "I Get Money." Also from late 2007 to early 2008, Fat Joe has been trading insults with 50 Cent as Jadakiss has chosen to stay neutral.

The Rebirth, The Inc.

Record sales were drastically cut due to their failing to defend themselves against 50 Cent's commercial bullying. Murder Inc. seemingly wilted away as label chiefs were under heavy fire from pending legal proceedings which also caused the company to cease all operations. On November 14, 2003, Irv Gotti held a press conference about the recent changes at Murder Inc., the feuds, the scandal and Ja Rule's trouble. In the end, he talked about changing the name from Murder Inc. to "The Inc." Records. Letterheads were officially changed over. This was due to several building complications on the legal side and marketing. Music video executives insisted the name change after refusing to air any chart-topping videos from Murder Inc. artists who were uneasy with the term "Murder" appearing. This change also appealed to any judge and jury who were gearing up to meet the Murder Inc. label heads over serious charges were put on the Lorenzo brothers and associates. The first album drop for the newly named label was R&B new act, Lloyd with his début solo, Southside.