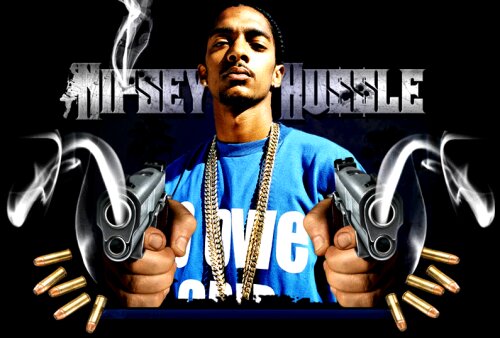 Nipsey is a newcomer to continue the long-standing Los Angeles Gangsta rap scene. As part of the Slauson Boyz, Nipsey reports from the heart of N.W.A.'s own South Central L.A. He brought DJ Felli Fel with him and produced several well-received mixtapes with Epic records. He has several collaborations with The Game, Yung Berg and Sean Kingston. Nipsey Hussle has one of the dopest feels in west coast hip-hop since Snoop Dogg rocked a high-top fade, but that's not to imply a comparison between the two west coast bangers.

He was born in Raised in Los Angeles, and is a self-proclaiming Rolling 60's Crip. Off his first album, Bullets Ain't Got No Name Vol. 1 the tracks "Six Owe" and "RSC For Life" he campaigns for his set, letting it be known who's behind him when he's rolling on Slauson. he was picked up by Epic Records in New York City after they caught ear of his first joint, "They Roll" featuring fellow hood star, The Game and produced by DJ Felli Fel who first put the track on radio rotation. After he and Felli brought 13 tracks to the desks of Epic, he was signed to a deal. Nipsey therefore works out of NYC with his recording studio at Epic in New York but dips back to the hood regularly.

His first two mixtapes of his four-part series, Bullets Ain't Got No Name follow The Slauson Boys group album Slauson Boys Vol. 1 which featured some of the earliest recordings of Nipsey Hussle. His immediate plans for 2008 include recording parts three and four of the Bullets Ain't Got No Name collection and volume 2 of the Slauson Boys group effort. Through 2009 he has scheduled a July-August drop of his début studio album, Rich Rollin' with a leading single featuring J.R. Rotem. Also a documentary named 60 Minutes is due to drop in '09 showing his roots of South Central.