At the Video Music Awards held at the Barker Hangar in Santa Monica, California in 2004 Suge Knight and The Row’s stars attended the event that showed high appreciation to Dr. Dre for his contributions to hip-hop over the past 20 years. This did not sit well with Suge Knight. Their bitter feud continued.

Violence broke out at the event after Suge Knight got onstage and yelled, "Fuck the G-Unit," then allegedly threw insults at the rest of the audience right before Dre was to achieve the lifetime achievement awards by Snoop Dogg and Quincy Jones. Jimmy James Johnson, an associate of Suge Knight’s who was sitting beside him at the event, walked down to Dre’s table surrounded by Dre’s G-Unit camp and struck the legend with a blow to the face. Immediately G-Unit soldiers stood up to protect their boss and three men brandished knives including rapper, Young Buck who stabbed the assailant several times. The fight continued for over twenty minutes with involved parties being maced by police intervening. In much horror to the star audience watching on, furniture was thrown and kicks laid into the man. The incident was calmed down for Dre to accept his accolade but onlookers were fleeing the hall in a panic and leaving the vicinity in cars. Subsequently the after party was cancelled. Nothing else had come of the altercation. Young Buck had retreated back to his hometown in Kentucky until Dre could convince him with strong support from Johnnie Cochran to return to face charges with L.A. authority. Dre insisted Johnson be charged with assault and battery.

Suge Knight was pulled over in his large pick up truck for making an illegal u-turn at 7.36pm Saturday 2nd February, 2005 heading southbound on the on-ramp on Interstate 15, according to the Barstow Police Department. When they received information that Suge was on parole, he gave them permission to search the vehicle for drugs and weapons. Upon searching, officer Retamoza found a small amount of marijuana in the truck. This was a violation of his parole. He was also cited for not having relevant insurance for the vehicle.

Suge Knight was arrested and held by San Bernadino’s County Sherrifs Department pending his transfer to state prison for the breach of parole conditions. Also arrested with him was his passsenger, 18 year old Alexis Wilkenson of Las Vegas who provided a false I.D. and false information, she was later released, as was Knight finally. 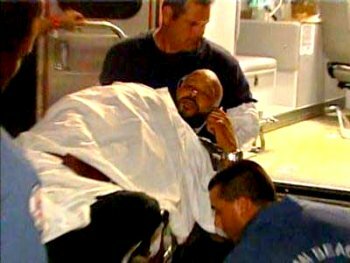 August 29, 2005 Suge Knight suffered a bullet wound in the right leg during an assassination attempt at the MTV Video Music Awards, the event that saw Suge disrupting the night with violence on Dr. Dre one year earlier. Knight was taken to Mount Sinai Medical Center in Miami Beach for surgery to remove the bullet and repair a broken bone that resulted from the shooting.

On a glitzy, star-studded night in Miami Beach, America was celebrating the new wave of explosive pop-rap culture that saw east and west coasts merged into one happy family of mainstream culture. Rapping sensations Kanye West, Outkast and 50 Cent celebrated their insurmountable dominance of hip-hop in the new age. With the violent destructive pattern of Death Row records well behind them, the VMA after party, held by Kanye West was a very smooth, well run affair. Although somebody invited Suge Knight and everything that goes with having America’s most notorious and hated music mogul in the house, nobody was expecting a hostile shootout tonight. Nobody was searched and at the door and the possible suspects run high with Suge Knight being one of the most hated and feared men in America.

The after party event was held at the Shore Club Hotel off Miami Beach. Suge Knight was sitting in the V.I.P. red room when at 12:42am. Sunday, an unidentified man walked up to the gangster and opened fire. Six shots were fired and Knight was hit in the right leg. No-one else was hurt. Police and fire fighters quickly arrived on scene and Knight was taken to hospital for treatment. Described only as a black man in a pink shirt, the gunman remained at large, Associated Press reports.

Responding to recent reports suggesting Suge Knight is the subject of many of his enemies putting a price on his head he simply put it, “If you raised up or born in the ghetto, watching your back is what you do naturally,” Suge said. “You don't choose the day you're gonna go. ... I don't walk in fear.”

Today Marion ‘Suger Bear’ Knight is still a notoriously feared man in America and is free. The new Don King of hip-hop heavyweights, Suge Knight too remains in the industry today without a prized fighter to sell records for. Therefore ‘Tha Row Records’ is suspected as fronting a continuing empire of illegal industry. Federal agencies are still keeping Suge Knight under heavy investigation and surveillance and every move is watched intently. The notorious dictator of the west will forever be known as a forceful contributor to the teething era of Gangsta Rap.

2nd April 2006
Record company CEO Suge Knight missed another court-ordered hearing on April 1st, 2006 to determine the legal ownership of pioneering west coast hip-hop label, Death Row Records. This comes about as a result of a long feud between old business partner Michael ‘Harry-O’ Harris who provided Suge with the capital start up money to launch the record label in 1991 from within prison. [see Welcome to Death Row] Harry O's wife Lydia Harris filed a lawsuit against Knight and in March of 2005, Knight was ordered to pay Mrs. Harris $107 million dollars.

Harris was awarded the judgment and a settlement that included $60million in punitive damages, $47million in economic and non-economic damages. Harry-O has since divorced from his wife and is claiming half of the $107million.

Failing to respond to legal inquiries regarding the case, continually not turning up to court hearings and not showing assets when ordered, Suge faces a term in jail again this time for contempt of court until he appears for a hearing to disclose all that he owns outright. As requested by attorneys, Death Row could be put into receivership with the valuable music rights catalogue to be auctioned off. Knight's assets have been frozen since August 2005. In February 2006 Knight and Death Row records filed a $106million lawsuit against Harry-O and other in Los Angeles Federal Court. Knight’s lawsuit alleges Harry-O is blackmailing the label with threats of exposing the illegal seed money for the legitimate company stem from proceeds from his drug enterprise.

On the 4th April, 2006 Knight has reportedly sought to file bankruptcy protection for himself and his record label. His lawyer told the Associated Press that the mogul was filing bankruptcy in an attempt to reorganize his financial affairs. This also serves as temporarily preventing Suge from losing the ownership of the label.