Tupac Shakur was the iconic effigy of not only the contemporary hip-hop culture but the epidemic struggle of black urban survival in the USA A very accomplished recording artist, poet and actor, Tupac stands as the highest selling rap/hip-hop artist of all-time as listed in the Guinness Book of Records having sold 67 million albums worldwide (mostly posthumously), with 37 million copies in the US alone. He is consistently ranked by peers, fans, music critics and executives in the music industry as the greatest rapper of all time, a hip-hop legend. Representing the ‘Thug Life’ image, Tupac presented a strong sense of hatred and prejudice to his surroundings, growing up with violence and standing for the justice of not only racism in America but the economic struggle of urban politics as presented throughout his musical career. As well as painting this vivid picture, he carried a very real sense of living his every word and persona of the misdirected passion of the ghetto. Shaped by a history of proud Black Panther role models in his upbringing, Tupac’s legacy is immortalized eternally through his extensive catalogue of classic albums still releasing ten years after his death.

Tupac Shakur was born to mother Alice Faye Williams. She named him after the last Inca Chief to be murdered by the Spanish conquistadors. The Islamic meaning of Tupac Amaru is ‘shining serpent’ and Shakur ‘thankful to god’. During her 1971 pregnancy to her only son, his mother who changed her name to Afeni Shakur was standing trial as a member of the Panther 21, the group held responsible for the conspiracy to blow up two New York department stores. For this she served jail-time facing a three year sentence whilst pregnant with him. Acting as her own attorney, she won the verdict and was released one month before Tupac’s birth. Tupac was brought up in very diverse circumstances, not unlike a lot of black youth in the ghettos he never knew his biological father leaving him confused as Afeni was married to Panther activist Lumumba Shakur at the time of her pregnancy Afeni told ‘Pac his father was either Harlem drug dealer ‘Legs’ or another activist Billy Garland who claimed paternity but rarely undertook fatherly responsibilities. Far better choice than Legs who entered Tupac’s life at the age of 12 and stayed long enough to turn his mother into a crack addict. During this unsettled period he was raised by his stepfather, Dr. Mutulu Shakur who held very strong ties to the civil movement and Black Panther Party. A convicted felon and political prisoner he is the brother of Joanne ‘Assata Shakur’ Chesimard, a civil rights activist who in 1977 was found guilty of murdering a New Jersey state trooper. After escaping from prison two years later with the help of Mutulu who himself was listed on the FBI’s Top Ten list for aiding in the escape of his sister and the attempted robbery of a Brinks armoured van in which two police officers and a security guard were killed. His godfather was the infamous Elmer ‘Geronimo’ Pratt, a high-ranking Black Panther member who was sentenced to life in prison for the convicted murder of a school teacher during an armed robbery in Santa Monica, LA. Tupac naturally had very politically motivated role models however with almost every adult member of his family behind bars this would profoundly affect Tupac’s life. He was given the title of ‘Black Prince’ and forecast to becoming the next leader of the ‘revolution’. Being raised in the black power movement and Black Panther philosophy gave him a very confident and distrusting outlook on society. Tupac lived an impoverished childhood with his mother and half-sister Sekyiwa by Dr. Mutulu Shakur. With Afeni’s boyfriend and Pac’s early father-figure Legs on the scene Afeni found herself addicted to crack-cocaine and with her two children was living unsettled between homeless shelters and moderately priced accommodations around Brooklyn and South Bronx of New York City, Tupac found it hard to retain any standing friendships and lived through writing poetry and diary entries as encouraged by his mother to stay out of trouble as well as being educated by Panther elders. By the age of 12 Tupac was enrolled in a Harlem theatre group and subsequently cast in Lorraine Hansberry’s ‘A Raisin in the Sun’ as Travis. He was also exposed to professor Cornel West’s work as well by his mother. This interest had never left ‘Pac as he continued studying theatrical acting later as a teenager in Baltimore. Before their move in ’84 Legs was arrested on credit card fraud and died a short time after of a strong drug overdose. This eternally fucked Tupac up. It took him three months to let out a tear and when he did he cried out, “I miss my daddy.” Afeni moved her family away from everything, out to Baltimore. 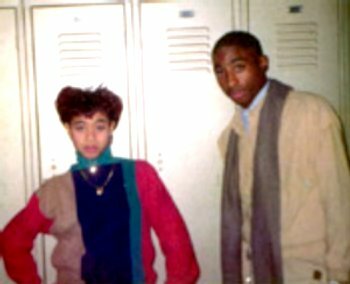 By 1985 Pac's family had moved to Baltimore, Maryland to live. They lived on Greenmount Ave. in East Baltimore, where Tupac found it hard to fit in with a different look and unfashionable cheap dress sense. He attended Roland Park Middle School and spent his freshman year at Paul Lawrence Dunbar High. At his sophmore level Tupac was accepted to the Baltimore School for the Arts where he enjoyed his classes studying theater, ballet, poetry, jazz and other arts. This was the most positive period in his young life where he performed Shakespearean plays and was accepted for who he was and free to express his nurtured creativity. He played the mouse king in the ‘Nutcracker’ play. Enrolled there also was another accomplished actress, Jada Pinkett who formed a lifelong friendship with Tupac. Remembered as a very gifted student by his teachers, Tupac carried an outspoken racial equality belief. He was an enthusiastic reader, reading books on eastern religions and philosophy. He had a love of literature and a strong will to learn. Unlike the bullied life in New York Tupac claimed he felt in touch with himself here, “I was feeling like I really wanted to be an artist… I was fucking white girls.” Tupac showed a very different side with his peers acting with bravado. It was this influence that fed Tupac with a new passion for rapping and he composed his first rap whilst in Baltimore under the name "MC New York". Inspired by the fatal murder of a close friend of his, he wrote the song about gun control and political awareness.