Afrika Bambaataa is one of the three Godfathers of hip hop culture. A world-renowned DJ from the South Bronx, who was instrumental in the early development of Hip Hop throughout the 1970s. Afrika Bambaataa is one of the three main originators of break-beat deeJjaying, and is respectfully known as the “Grandfather” and “Godfather” and The Amen Ra of Universal Hip Hop Culture as well as The Father of The Electro Funk Sound. Through his co-opting of the street gang the Black Spades into the music and culture-oriented Universal Zulu Nation, he is responsible for spreading rap and hip-hop culture throughout the world. Like many of the early pioneers in Hip-Hop, he is of West Indian descent. On September 27, 2007, he was nominated for induction into the Rock and Roll Hall of Fame.

Bambaataa was a founding member of the Bronx River Projects-area street gang, The Savage Seven. Due to the explosive growth of the gang, it later became known as the Black Spades, and he rose to the position of Division Leader. After a life-changing visit to Africa, he changed his name to Afrika Bambaataa Aasim, adopting the name of the Zulu chief Bhambatha, who led an armed rebellion against unfair economic practices in early 20th century South Africa that can be seen as a precursor to the anti-Apartheid movement. Bambaataa was influenced by the courage and strategic brilliance of Shaka Zulu seen in the movie and TV series “Shaka Zulu”. Inspired by DJ Kool Herc and Kool DJ Dee, he too began hosting Hip-Hop parties. After he returned from his life changing trip to Africa, he vowed to use Hip-Hop to draw angry kids out of gangs and formed Zulu Nation. During 1982, Afrika Bambaataa and his followers group of dancers, artists and DJs went outside the United States on the first Hip-Hop tour. Bambataa saw that the Hip-Hop tours will be the key to help expand Hip-Hop and Universal Zulu Nation. In addition it will help promote the values of Hip-Hop that he believed are based on peace, unity, love, and having fun. His influence inspired many overseas artists like the French rapper MC. Solaar. He was a popular DJ in South Bronx rap scene and became known not only as Afrika Bambaataa but also as the “Master of Records.” He established two rap crews: the Jazzy 5 including MCs Master Ice, Mr. Freeze, Master Bee, Master D.E.E, and AJ Les, and the second Crew referred to as Soulsonic Force including Mr. Biggs, Pow Wow and Emcee G.L.O.B.E. In that same year Bambaataa and Soulsonic Force dropped the live band to go high-tech. He was provided an eerie keyboard hook by Kraftwerk who has been known for robotic trance music and popular among inner-city youth and also provided electronic “beat-box” by producer Arther Baker and synthesizer player John Robie. That, however, resulted in a pop hit “Planet Rock”, which went to gold status and generated an entire school of “electro-boggie” rap and dance music. Bambaataa formed his own label to release the Time Zone Compilation. He created “turntablism” as its own sub genre and the ratification of “electronica” as an industry-certified trend in the late ’90s. Bambaataa established a name to be recognized not only inside the hip-hop community but outside as well. Moreover, Bambaataa believed that the core values of Hip-Hop were: peace, unity, love and having fun. He was the “Godfather” of hip-hop as he is responsible for the Hip-Hop movement in Europe, Africa and Asia as well as the first one to name the culture Hip Hop. Bambaataa brought peace to the gangs as many artists and gang members say that “Hip-Hop saved a lot of lives”. Bambaataa became famous in the industry due to his early use of drum machines and computer sounds. He was instrumental in changing the way R&B and other forms of black music were recorded.

Bambaataa decided to use his leadership to turn those involved in the gang life into something more positive to the community. This began the development of what later became known as the Universal Zulu Nation, a group of socially & politically aware rappers, B-boys, graffiti artists and other people involved in Hip Hop culture. By 1977, inspired by DJ Kool Herc and Kool DJ Dee and after Disco King Mario loaned him his first equipment, Bambaataa began organizing block parties all around the South Bronx. He even faced his long time friend, Disco King Mario in a DJ battle. He then began performing at Stevenson High School and formed the Bronx River Organization, then later simply “The Organization”. Bambaataa had deejayed with his own sound system at the Bronx River Community Center, with Mr. Biggs, Queen Kenya, and Cowboy, who accompanied him in performances in the community. Because of his prior status in the Black Spades, he already had an established Army party crowd drawn from former members of the gang. He became known as one of the best DJs in the Bronx. About a year later he reformed the group, calling it the Zulu Nation (inspired by his wide studies on African history at the time). Five b-boys (break dancers) joined him, whom he called the ZULU Kings, and later formed the Zulu Queens, and the Shaka ZULU Kings and Queens. As he continued deejaying, more DJs, rappers, break dancers, graffiti writers, and artists followed him, and he took them under his wing and made them all members of his Zulu Nation. He was also the founder of the SoulSonic Force, which originally consisted of approximately twenty Zulu Nation members: Mr. Biggs, Queen Kenya, DJ Cowboy SoulSonic Force (#2), Pow Wow, G.L.0.B.E. (creator of the “MC popping” rap style), DJ Jazzy Jay, Cosmic Force, Queen Lisa Lee, Prince Ikey C, Ice Ice (#1), Chubby Chub; Jazzy Five-DJ Jazzy Jay, Mr. Freeze, Master D.E.E., Kool DJ Red Alert, Sundance, Ice Ice (#2), Charlie Choo, Master Bee, Busy Bee Starski, Akbar (Lil Starski), and Raheim. The personnel for the Soul Sonic Force were groups within groups with whom he would perform and make records. In 1980, his groups made their first recording with Paul Winley Records titled, “Death Mix”. Winley also recorded Soul Sonic Force’s landmark single, “Zulu Nation Throwdown”, produced by Paul Winley. Disappointed with the results of the single, he left the company.

In 1982, Hip-Hop artist Fab Five Freddy was putting together music packages in the largely white downtown Manhattan New Wave clubs, and invited Bam to perform at one of them, the Mudd Club. It was the first time Bam had performed before a predominantly white crowd, making it one of the first times that Hip-Hop had fused with white culture. Attendance for Bam’s parties downtown became so large that he had to move to larger venues, first to the Ritz, with Malcolm McLaren’s group Bow Wow Wow (and where the Rock Steady Crew b-boys became part of the Zulu Nation), then to the Peppermint Lounge, The Jefferson, Negril, Danceteria, and the Roxy. “Planet Rock”, a popular single, came out that June under the name Afrika Bambaataa and the Soulsonic Force. The song borrowed musical motifs from German electro-pop, funk, and rock. All the different elements and musical styles were blended together; and in doing so, they offered Hip-Hop as a new vision for global harmony. The song became an immediate hit and stormed the music charts worldwide. The song melded the main melody from Kraftwerk’s “Trans-Europe Express” with electronic beats based on their track “Numbers” as well as portions from records by Babe Ruth and Captain Sky - thus creating a new style of music altogether, electro funk. It influenced many styles of electronic and dance music, e.g. freestyle music, house music and techno music. Bambaataa organized the very first European hip-hop tour. Along with himself were rapper and graffiti artist Rammellzee, Zulu Nation DJ Grand Mixer DXT (formerly Grand Mixer D.St), B-boy and B-girl crews the Rock Steady Crew, and the Double Dutch Girls, as well as legendary graffiti artists Fab 5 Freddy, PHASE 2, Futura 2000, and Dondi. 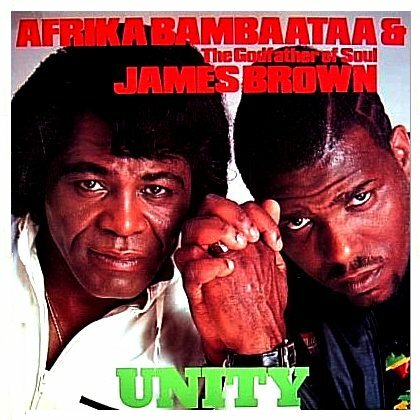 Afrika Bambaataa’s second release around 1983 was “Looking for the Perfect Beat,” then later, “Renegades of Funk,” both with the same SoulSonic Force. He began working with producer Bill Laswell at Jean Karakos’s Celluloid Records, where he developed and placed two groups on the label: “Time Zone” and “Shango”. He recorded “Wildstyle” with Time Zone, and he recorded a collaboration with punk-rocker John Lydon and Time Zone in 1984, titled “World Destruction”. Shango’s album Shango Funk Theology was also released by the label in 1984. That same year, Bam and other Hip-Hop celebrities appeared in the movie Beat Street.He also made a landmark recording with James Brown, titled “Unity.” It was billed in music industry circles as “the Godfather of Soul meets the Godfather of Hip Hop.” Around October 1985, Bambaataa and other music stars worked on the anti-apartheid album Sun City with Little Steven Van Zandt, Run-D.M.C., Lou Reed, and numerous others. During 1988, he recorded another landmark piece as “Afrika Bambaataa and Family” on Capitol Records, titled The Light, featuring Nona Hendryx, UB40, Boy George, George Clinton, Bootsy Collins, and Yellowman. Bam had recorded a few other works with Family three years earlier, one titled “Funk you” in 85, and the other titled Beware (The Funk Is Everywhere) in 1986. In 1990, Bambaataa made Life magazine’s “Most Important Americans of the 20th Century” issue. He was also involved in the anti-apartheid work “Hip Hop Artists Against Apartheid” for Warlock Records. He teamed with the Jungle Brothers to record the album Return to Planet Rock (The Second Coming). Greenstreet Records, John Baker, and Bambaataa organized a concert at Wembley Stadium in London in 1990 for the A.N.C. (African National Congress), in honour of Nelson Mandela’s release from prison (not to be confused with the Nelson Mandela 70th Birthday Tribute held at the same venue two years earlier and organised by Jerry Dammers). The concert brought together performances by British and American rappers, and also introduced both Nelson and Winnie Mandela and the A.N.C. to hip-hop audiences. In relation to the event, the recording Ndodemnyama (Free South Africa) helped raise approximately $30,000 for the A.N.C. Bam also helped to raise funds for the organization in Italy. From the mid-1990s, Bambaataa returned to his electro roots, collaborating with WestBam (who was named after him) which culminated in the 2004 album Dark Matter Moving at the Speed of Light which featured Gary Numan and many others. In 2000, Rage Against the Machine covered Afrika’s song “Renegades of Funk” for their album Renegades. In that same year, Afrika Bambaataa collaborated with Leftfield on the song “Afrika Shox”, the first single from Leftfield’s Rhythm and Stealth. “Afrika Shox” is also popularly known from the soundtrack to Vanilla Sky. In 2006, he was featured on the British singer Jamelia’s album Walk With Me on a song called Do Me Right, and on Mekon’s album Some Thing Came Up, on the track D-Funktional. Bambaataa has also performed the lyrics on the track “Is There Anybody Out There” by The Bassheads. As an actor, he has played a variety of both hilarious and serious voice-over character roles in the international television series known around the world as Kung Faux from Dubtitled Entertainment and Tommy Boy Films. On September 27, 2007, it was announced that Afrika Bambaataa was one of the nine nominees for the 2008 Rock and Roll Hall of Fame Inductions. On December 22, 2007, he made a surprise appearance performing at the First Annual Tribute Fit For the King of King Records, Mr. Dynamite James Brown in Covington, KY. As of Summer 2008, he was featured as part of the Rock the Bells 2008 tour, dj-ing on the second stage on select dates.