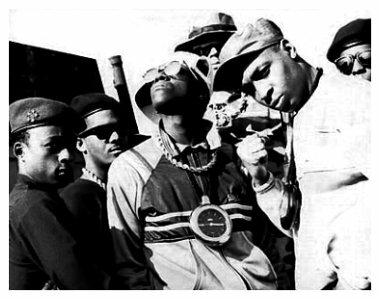 Also known as a New York hip-hop group, these awesome black-fist galvanised, political-based revolutionaries of afro-centricity through music has dominated the medium of rap music with their teachings of black heritage and self-defence as a periodical continuation of Malcolm X meets the might of the Black Panther Party. Strapped leather boots, militant black strides and reversed New York Yankee baseball caps replacing the Nation of Islam skull caps, this rap group saw themselves as the ministers of information for the new generation of knuckleheads. Public Enemy is notorious for their politically charged lyrics and critical pot shots at the media with strong active interests in the welfare of the African-American society within the U.S. Public Enemy continued the efforts of KRS-One’s BDP rhetoric of raising self-awareness to a pro-black conscious level that almost left a growing white audience hesitant to nod their heads along to their beats of brotherhood. For this Public Enemy became public enemy number one in controversy and influence in the future of hip-hop music.

As a rap group, Chuck D and Flavor Flav’s Public Enemy pioneered a new distinct variation of hardcore rap that carried the street-oriented beats borrowed from Run D.M.C. and the social awareness of Boogie Down Productions. Chuck D’s booming authoritative vocals rhymed defiantly and politically on social issues affecting the black community. He has always been an advocate of extreme activism and revolutionary tactics to change the ways for the better of all. Banged up with their production team the Bomb Squad they amalgamated to create a dense, caged soundtrack complimenting P.E.’s disturbing and volatile raps with oppressive beats over alarming city-street sirens and deep funk for a rounded off late-night soundscape. The feel was an overall erratic climb to a chaotic crescendo that left the music invigorating the listener. Based on Chuck D’s overlying political MC assault and the comic blend of his absurdist side-kick Flavor Flav, who became the group’s main visual focal point as he stomped around stage and videos with hilarious hats and sunglasses and an over-sized clock to serve as a constant reminder to let him know what time it is, hanging around the neck of his under-developed teenage frame. He would sometimes be present with a baby bottle filled with red cordial or maybe alcohol and screaming “Yeeeaah Boyeee!” Despite this theatrical dynamic to the repertoire it never diluted the concentrated purpose of Public Enemy’s public-service announcement-like message served by the stringent routine of hard-lined Chuck D which was visually backed by P.E.’s choreographed dance team, "The Security of the First World" or S1W. This collection of black males dressed in militant-black code with Gestapo boots who moved in rhythm to routines resembling martial arts, military drills and ‘Step Show’ dances lifted from college fraternities were doubled as the rap group’s security team. From the late eighties through the entirety of the nineties music critics embraced their unique records in one hand while in the other received plenty of controversy for their militant stance and lyrics which was deemed as threatening. For this Public Enemy grew into hip-hop’s most radical group and represented the new branch working outside of the Boogie-Down HQ, the Black-Belt of Long Island.

Public Enemy was formed in Roosevelt, Long Island, New York around 1982 spawned from the mobile DJing unit ‘Spectrum City’ which grew from the radio training program in the Roosevelt Youth Center in 1978 by Hank ‘Shocklee’ Boxley who at the time was a renowned Long Island DJ with a standing reputation of the mother-borough’s Afrika Bambaataa. The Youth Center housed future’s great comedians like Eddie Murphy who was a teenage friend of Chuck D’s. Late 1978 while attending summer jobs in Manhattan, young Carlton Ridenhour came across recording tapes and began writing rhymes alongside childhood friend, Hank who both became the centre of the Long Island hip-hop emergence echoing out from the Bronx. The new energy from Long Island came from Spectrum City. They made flyers for upcoming events but they were wack. Aspiring graphics Designer, Ridenhour pursued the project of creating their flyers in a more noticeable fashion. Shocklee turned him down. While Ridenhour was studying graphics design at Adelphi C.W. Post (a small Garden City liberal arts college) Spectrum City hosted shows there where the school also hosted open mic nights for amateur MCs. By 1979 Shocklee who had since recruited local DJ, Norman ‘DJ Mellow D’ Rogers (later renamed Terminator X) was convinced he needed an MC for his DJing show. On open mic night at Thursday Night Showdown Shocklee noticed a more marketable talent in Ridenhour, his sonic booming voice carried an imposing threat, whatever the words were. He amped up the vibe of a crowd or party and became locally one of the best party MCs around. Ridenhour laid out most other MCs at any battle presented to him. Shocklee discovered the boy was from Roosevelt and had found his front man in young Ridenhour.

Ridenhour convinced himself of his true calling after Sugar Hill’s, "Rapper’s Delight" came out. He became known on the mic as Chuckie D and took over responsibilities as designing the crew’s flyers and strolled campus proudly in his new Spectrum City jacket. He had a cartoon section in the university newspaper called "Tales of a Skind" where upon he drew Spectrum City as super heroes fighting the evil of Reagan, King of the 666 and other villains. While at Adelphi, Ridenhour had ran into scholarship student, Bill Stephney who was a fan of Spectrum City and had now landed an internship with trendy rock station WLIR-FM and through this landed the job hosting the Monday Night Hip-Hop show on the college campus radio station WBAU. Being a fan of their shows, Stephney approached Ridenhour and Shocklee sporting their jackets in the cafeteria and invited them to join his Monday night show. Together they turned a small 300 watt station into a major contender for rap-heads across Long Island. Stephney gave Ridenhour and Shocklee their own show on Saturday night called "Super Spectrum Mix Hour". Here Strong Island hip-hop was at home. The guys broached topics from Schoolly D’s influence in the new genre, White Castle cheeseburgers, Vanessa Williams’ Miss America, Mets, Yankees, Jets, Giants, Knicks to Jesse Jackson’s presidential campaign. The Harlem barbershop debates were broadcast on radio to stuck-up, better-classed black and white arts students. This was seen as a threat to the authorities. One night after a show and continued partying, in the parking lot of a White Castle restaurant a police helicopter and a fleet of Nassau County cop cars swooped down and surrounded the group. There were reports of a riot. Around this same period Shocklee had worked on a track, "Public Enemy Number One" which Chuckie D appeared on rapping over the beat. This would later be Chuck D’s gateway to fame.